Researchers have developed a bandage that stimulates and directs blood vessel growth on the surface of a wound. The bandage, called a “microvascular stamp,” contains living cells that deliver growth factors to damaged tissues in a defined pattern. After a week, the pattern of the stamp “is written in blood vessels,” the researchers report.

A paper describing the new approach will appear as the January 2012 cover article of the journal Advanced Materials. 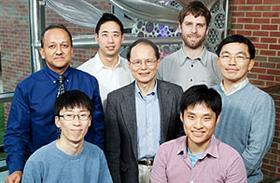 “Any kind of tissue you want to rebuild, including bone, muscle or skin, is highly vascularized,” said Chemical and Biomolecular Engineering Professor Hyunjoon Kong, a co-principal investigator on the study with ECE Professor Rashid Bashir. “But one of the big challenges in recreating vascular networks is how we can control the growth and spacing of new blood vessels.”

“The ability to pattern functional blood vessels at this scale in living tissue has not been demonstrated before,” said Bashir, the director of the Micro and Nanotechnology Lab (MNTL). “We can now write features in blood vessels.”

Other laboratories have embedded growth factors in materials applied to wounds in an effort to direct blood vessel growth. The new approach is the first to incorporate live cells in a stamp. These cells release growth factors in a more sustained, targeted manner than other methods, Kong said.

The stamp is nearly 1 centimeter across and is built of layers of a hydrogel made of polyethylene glycol (an FDA-approved polymer used in laxatives and pharmaceuticals) and methacrylic alginate (an edible, Jell-O-like material).

The stamp is porous, allowing small molecules to leak through, and contains channels of various sizes to direct the flow of larger molecules, such as growth factors. 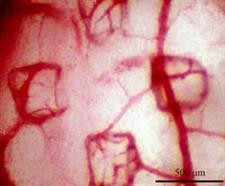 After the stamp is removed its pattern is revealed in the pattern of blood vessels. Photo courtesy Micro and Nanotechnology Lab.

The researchers tested the stamp on the surface of a chicken embryo. After a week the stamp was removed, revealing a network of new blood vessels that mirrored the pattern of the channels in the stamp.

“This is a first demonstration that the blood vessels are controlled by the biomaterials,” said Kong, who is also affiliated with MNTL.

In another study published earlier this year, the team developed a biodegradable material that supports living cells. Future research will test whether the new material also can be used a stamp.

This study was supported in part by the National Science Foundation Emergent Behaviors of Integrated Cellular Systems Center at Illinois, Georgia Institute of Technology and Massachusetts Institute of Technology; the U.S. Army Telemedicine & Advanced Technology Research Center; an NSF Career grant; the American Heart Association; and the Amore Pacific Corp.

Bashir, the Abel Bliss Professor of Engineering, also is a professor of bioengineering. He and Kong are also affiliated with the Institute for Genomic Biology at Illinois.