A milestone year for Bardeen

This year marks an important centennial and a semicentennial for ECE Illinois and the University of Illinois. The late ECE professor and transistor inventor John Bardeen was born on May 23, 1908, and what Bardeen considered to be his greatest brainchild—the theory of superconductivity—was published in 1957. 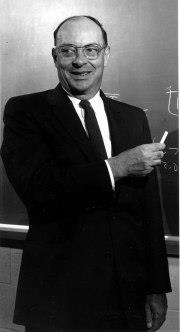 Bardeen, Leon Cooper and J. Robert Schrieffer received the 1972 Nobel Prize in Physics for their theory of superconductivity, which has come to be called simply "BCS" (for Bardeen, Cooper, and Schrieffer). Bardeen had won his first physics Nobel in 1956, along with Bell Labs colleagues Walter Brattain and William Shockley, for inventing the transistor. No one else has won two such prizes.

BCS explains the mysterious loss of electrical resistance in certain metals at extremely low temperatures—a puzzle that for decades stumped such physics luminaries as Einstein, Bohr, and Feynman. After it was published in 1957, the theory quickly won acceptance among specialists and still stands today as a pillar of the field of condensed matter physics.

Bardeen joined the Illinois faculty in 1951 in order to focus on superconductivity. Schrieffer enrolled as a graduate student under Bardeen in 1953 and Cooper came on board as a postdoc in 1955, completing the team that would crack one of physics’ toughest riddles.

Bardeen set the direction for the group by framing the problem around the existence of an energy gap between the normal and the superconducting states of the metal. The gap seemed to arise from the interaction of electrons and phonons, the quantized acoustic vibrations of the crystal lattice, but no one could identify the precise mechanism. It was Cooper in early 1956 who accounted for the energy gap with his notion of "Cooper pairs," electron pairs created when the attractive force caused by the electron-phonon interaction dominated the normal repelling force, or Coulomb force. Nearly a year later, Schrieffer convinced Cooper’s skeptics (including Bardeen) by calculating a wave function for the Cooper pairs that satisfied the requirements of quantum theory. The team spent the next several months deeply immersed in checking, fleshing out, and refining the BCS theory, before submitting their paper to Physical Review for publication in December 1957.

Fifty years later, BCS is the model for the patient, collaborative, and experimentally based way of doing physics that has come to be called the "Urbana style." Aspects of the theory have been adopted to solve fundamental problems of particle physicists. The technological impact of the theory has been felt in fields ranging from medicine to astronomy to transportation.

"That may be one of the reasons that he was so successful—because he stayed with something so long," said Bardeen’s biographer, U of I historian Lillian Hoddeson. "This is something that his mother once mentioned in a letter, too … that he just hangs on—he doesn't let go until he has really pursued the question."

That bulldog quality changed the worlds of theoretical physics and technology. "Bardeen ushered in a revolution," said ECE professor Nick Holonyak Jr., who was Bardeen’s first graduate student at Illinois. "If you turn off all the transistors in the world for one second, it would be a cataclysm."

Bardeen died in 1991 after four decades on the ECE and Physics faculties. The quadrangle between Engineering Hall and Grainger Library was dedicated as the Bardeen Quad in 2004.