By studying the behavior of living cells and combining them with synthetic tissue, researchers are creating “biological machines” to deliver drugs more effectively, function as internal diagnostic tools, or serve as contaminant sensors in the field. 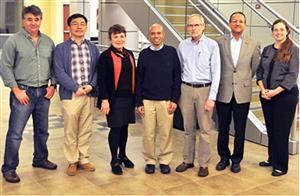 According to Rashid Bashir, EBICS co-principal investigator and head of the Department of Bioengineering at Illinois, the goal of the project is to build non-natural functions with cells. “Take vascular disease, for example," says Bashir. "One could approach the problem from the standpoint of, ‘What if we could take passive vascular cells and combine them with cardiac muscle cells to create vascular tissue that could pump?’ Such devices would allow patients’ own bodies to become part of the solution.” The group’s efforts aren’t limited to improving human health. “We’re also interested in building living machines that can do things like sense toxins in water and potentially neutralize them,” he adds.

In the first phase of the project, the researchers examined the behaviors of muscle, neuronal and vascular cells. Although much is known about how these cells function, little was known about integrating them.

Gillette’s group develops neuronal circuits to provide sensing and processing. Kong develops new scaffolds and biomaterials to “house” the cells and the machines. And Popescu develops new imaging techniques to visualize and study the emergent behavior of living cells over time. Saif’s group developed one- and two-dimensional swimming bots whose locomotion tissue is made from soft polymers and 10-micron-thick films. These millimeter-scale “swimmers” can propel themselves in one direction using the force generated by heart muscle cells. According to Saif, this research could pave the way for internal diagnostics that are more accurate than poking or prodding, or they can be developed to deliver drugs to treat disease.

For another biobot, the researchers randomly placed rat heart muscle cells on a layer of soft plastic hydrogel that they designed and printed with a 3-D printer. The natural contracting and relaxing of the cells allowed the bot to pull itself along or “walk” in culture medium.

Another “walking” device relies on skeletal muscle cells. It responds and moves on command to electric fields. Most recently, the team has been working with muscle cells that can be controlled remotely by blue light and could be the key to developing new remotely controlled tissues and systems.