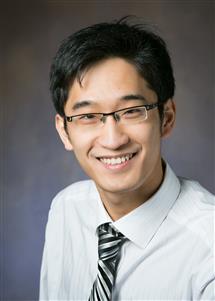 Lam, working with Professor Zhi-Pei Liang, has been working on developing new technologies to image the brain. The awards recognize his research accomplishments on ultrahigh resolution metabolic imaging and improved diffusion imaging of the brain.

“When you have a glass of water and you put a drop of ink into it, you can see a beautiful pattern as the ink particles diffuse in the water,” Lam said. “The same thing happens with water molecules in the brain, though it’s more restricted due to the complex tissue environments.”

By analyzing the patterns of how water molecules travel in the brain tissue using nuclear magnetic resonance, or NMR, researchers can noninvasively infer how neurons and other brain cells, or “wiring,” are organized inside the brain. One application: when neurosurgeons are about to operate on a patient, they need to map out the “wirings” around the lesion beforehand in order to avoid accidentally cutting them and damaging the brain further.

This is where Lam’s research in one of his award-winning papers comes in: by developing a new algorithm to filter very noisy NMR signals, Lam found a way to infer the water molecules’ diffusion pattern inside the brain more accurately. Using this data, Lam could make much more detailed maps wiring in the brain. Apart from assisting surgeons on surgical planning, Lam mentioned that a greater understanding of brain connectivity also find a wide range of applications in neuroscience studies.

Along with imaging water’s diffusion in the brain, Lam’s IEEE paper focuses on tackling another major challenge in the field: ultrahigh resolution metabolic imaging of the brain.

By the time doctors can see disease-induced structural changes, the disease has usually progressed considerably. Lam instead works on ways to examine the brain for levels of molecules called metabolites and neurotransmitters, which can offer scientists and clinicians information about biochemical or metabolic changes happening in the brain, and perhaps detect diseases much earlier in their progression.

When certain changes start affecting the brain, for example, neurodegenerative diseases like Alzheimer’s, the brain’s metabolism alters. By analyzing the levels of the molecules generated by brain metabolism using a method called magnetic resonance spectroscopic imaging (MRSI), scientists and doctors could detect whether neurodegenerative diseases are at play, potentially much earlier than when those diseases start affecting the brain’s physical layout.

The problem with imaging these molecules is that the signals they generate are thousands of times weaker than signals from the water molecules, making them difficult to detect. This fundamental sensitivity issue with MRSI has made the problem extremely challenging and raised a lot of skepticism about ultrahigh resolution MRSI in the MRI community. 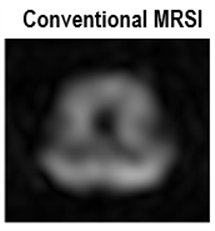 A conventional scan for biochemicals in the brain, revealing little due to its low resolution.

When Lam was looking for a groundbreaking challenge to tackle, the opportunity was too tantalizing not to try. Liang had come up with a possible solution to the problem, and together, they along with other members in Liang’s group, decided to attempt the impossible.

“Fan is brilliant; he is one of those rare talents that a professor may encounter once in every 10 years or so. I was very pleased that he chose to work on the problem as I believe that he has the right skill set and temperament to tackle this type of research problems,” Liang said.

Lam tackled the problem, drawing knowledge from disciplines as varied as spin physics to machine learning, and came up with a brand-new subspace imaging approach. After months of ups and downs and one rejection, Lam finally won the conference’s best paper award for his work.

A scan for biochemicals using Lam's method, which reveals much more information about levels of different molecules in the brain.

“It has been a very special intellectual journey. In addition to the technical challenges, a big challenge for me, as a junior researcher, was to believe that we would eventually succeed when most in the field considered it unattainable,” Lam said. “Professor Liang’s guidance, the wonderful colleagues I have, and the outstanding research environment and culture Illinois offers were instrumental to my research success.”

“I am very proud of him," Liang said. "Fan is a good role model for our graduate students, and his success represents well what our top-rank academic and research program is about." “I am fortunate to work with a group of passionate and brilliant colleagues; it would not have been possible to make such progress on this challenging problem without their efforts," Lam said. “Zhi-Pei’s guidance and support are also instrumental to our research. His passion, vision and unique perspectives to different problems have been constantly motivating and inspiring me.”