After decades of studying airglows in the Northern Hemisphere, ECE Professor Gary R Swenson and a team of atmospheric physicists are moving their research south.

Swenson and members of the Remote Sensing and Space Sciences (RSSS) group are building a new 900-square-foot facility at Cerro Pachon in northern Chile. There, they will study the middle atmosphere using an active lidar (light detection and ranging), which, when projected onto a sodium layer, acts as a tracer to study wind and temperature in the atmosphere. In addition, they will observe airglows, which are weak light emissions produced by the recombination of atomic oxygen in the earth's atmosphere. Airglows are sometimes visible to the naked eye, appearing as a dim haze in the night sky.

"Airglows are affected by tides and atmospheric waves, and those are different in the Southern Hemisphere than in the north," says Swenson, who is also a researcher in the Coordinated Science Laboratory. "It will aid our research to gain a better understanding of atmospheric dynamics in the Southern Hemisphere, in an active mountainous region with strong wave forcing."

Atmospheric waves are responsible for moving energy from the lower to upper atmosphere, where the energy is redistributed. By understanding the movement, scientists may be able to create better composition, circulation and transport models. Swenson's team, for example, will study the correlation between atmospheric waves and circulation, examining whether more waves enhance upper atmospheric meridional (north-south) transport. 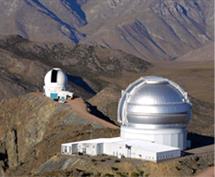 The 900-square-foot lidar facility being built in Chile will share Cerro Pachon with the 8.1-m Gemini south and 4.2-m SOAR telescopes.

The RSSS group will study the region using lidar, optical remote sensing technology that is similar to radar but uses light instead of radio waves. The equipment features highly sophisticated transmitters with lasers that beam light into the earth's atmosphere, some 30 to 110 kilometers from the surface. The beams interact with sodium, which reflects light back to earth where a large telescope captures photons and records them with electronic sensors. The sensed photons are analyzed to determine the temperature and winds in the upper atmosphere.

Swenson plans to send a small team to Chile for 3-week campaigns several times a year. Cerro Pachon, an 8,800-foot peak in the Andes foothills, is also the site for the proposed Large Synoptic Survey Telescope, a major astronomy project.

"The location is high and dry," Swenson says. "The mountains force atmospheric gravity waves, which are essential to our research."

The building has five rooms, including one for the transmitter, one for the receiver and three that will house large cameras to study the airglows.

Before moving to Chile, the system was located at an Air Force facility in Maui. Previously, it had been located at a military base in Albuquerque, New Mexico. It is currently located at the Urbana Atmospheric Observatory on High Cross Road, where the team is modifying and testing the systems before transporting them to Chile. Dr. Alan Liu (Research Scientist) and graduate students Chad Carlson and Tony Mangognia are active team members involved in the engineering modifications and testing.